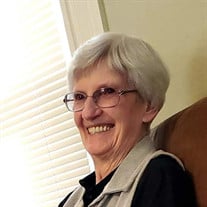 Ruby Veronica Lewis, 84, of Iola went to be with her Lord and Savior, Jesus Christ, on Saturday, December 25, 2021. Ruby was born on February 18, 1937 in Blaine, Kansas, the daughter of Martin and Teresa (Bennett) Horgan. Ruby grew up on a farm outside Blaine, KS and graduated from Frankfort High School. After graduating from high school Ruby began a life dedicated to helping others and to serving the Lord. Even though Ruby worked at Lear IGA in Moran, and Haldex in Iola for a good portion of her adult life, her most memorable job was at Kansas State University in the entomology department where she was brave enough to eat chocolate covered ants. Ruby really enjoyed volunteering at River Tree Christian Church in Iola where she was a charter member. She loved going to coffee with her friends and taking care of them when they were sick. She really enjoyed tutoring children after school, and being a clown for parties. She was so proud of her grandchildren and her family was incredibly important to her, especially her siblings. On December 28, 1957, Ruby married John Edward “Jack” Lewis in Manhattan, they were married for 35 years until his passing on November 16, 1993. Ruby will always be remembered for being very empathetic, non-judgmental, an incredibly good listener, and one to never complain even though Parkinson’s disease made life very difficult. Ruby is survived by: Her daughter: Lisa Parker and her life partner Cheryl Wyrick of Raytown, MO Two sons: Matt Lewis and his wife Earlene of Savonburg, KS Greg Lewis and his wife Michele of Chanute, KS Four sisters: Rose Mallon of Manhattan, KS Carm Drum of Topeka, KS Bernadette Hecker of Topeka, KS Cheryl Randal of Scranton, KS One Brother: Mike Horgan of Salina, TX Eight Grandchildren Fourteen Great-Grandchildren Ruby was preceded in death by her husband Jack, parents, daughter Sharon Fogle, sisters: Mary, June, and Lillian, and one brother Leo. A memorial service will be held on Monday, January 3, 2022 at 11:00 am at Ambassador Christian Church in Chanute. In lieu of flowers, memorials have been suggested to the Parkinson’s Foundation at: https://secure3.convio.net/prkorg/site/Donation2?10243.donation=form1&df_id=10243&mfc_pref=T Online condolences may be left at: www.countrysidefh.com. Services entrusted to Countryside Funeral Home 101 N. Highland, Chanute, KS 66720.

Ruby Veronica Lewis, 84, of Iola went to be with her Lord and Savior, Jesus Christ, on Saturday, December 25, 2021. Ruby was born on February 18, 1937 in Blaine, Kansas, the daughter of Martin and Teresa (Bennett) Horgan. Ruby grew up on a... View Obituary & Service Information

The family of Ruby Veronica Lewis created this Life Tributes page to make it easy to share your memories.

Ruby Veronica Lewis, 84, of Iola went to be with her Lord and...

Send flowers to the Lewis family.