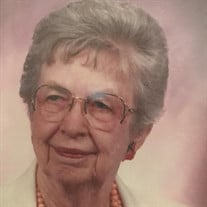 Ruth Elisabeth Brown, 99, passed away on Friday, February 26, 2021 at the Oak Crest Rehabilitation Center in Dekalb, IL. Ruth was born on March 18, 1921 in the Burris Addition, Chanute, KS., the daughter of Lewis Earl and Anna Elisabeth (Watt) Cunningham. Ruth was a graduate of Chanute High School, class of 1939, she then continued her education at Chanute Junior College, and graduated from Baker University. In 1950 she started working toward her Master’s in Religious Education, in Dallas, TX. On March 6, 1958 Ruth married Joseph Randall Brown in Colorado Springs, CO. Ruth and Joseph were married for 34 years until his passing of March 28, 1992. Ruth dedicated her life to her family and their churches where they served in Colorado, Illinois, and Kansas until her retirement, and returned to Chanute in 1987. She volunteered with helping at the Hutton School, First Grade class, United Methodist Women, and served as the President for Church Women of the First United Methodist Church, until returning to Illinois in 2003 to be closer to her sons, living in the DeKalb Area Retirement Center (Oak Crest), where she was very involved within the community and volunteering. Ruth is survived by: Sons: Earl Scott Brown of Carpentersville, IL Paul Randall Brown of West Chicago, IL Niece: Elena Mehl of Houston, TX She was preceded in death by her parents, husband Joseph, a brother Benjamin Cunningham and a sister Esther Peery. Funeral services will be held:_Monday March 8, 2021 at 11:00 AM at Memorial Park Cemetery in Chanute. Memorials have been suggested to the National Alliance for the Mentally Ill in her name or the First United Methodist Church and may be left with or mailed to the funeral home. Online condolences may be left at: www.countrysidefh.com Services entrusted to: Countryside Funeral Home 101 N. Highland, Chanute, KS 66720

The family of Ruth E. Brown created this Life Tributes page to make it easy to share your memories.