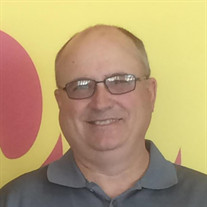 Ryan Dean Oneal, age 57 of Fredonia, KS, passed away September 26, 2021 at Hays Medical Center in Hays, KS. Ryan was born January 6, 1964 in El Dorado, KS to Jerry and Susie (Resser) Oneal. He grew up in Fredonia, attending Fredonia High School, graduating in the class of 1982. He then attended Coffeyville Vo Tech. On May 17, 1986, Ryan married Lori Smith in Fredonia, KS. He also joined the United States Army in 1986, serving his country for nearly 2 years, stationed in Germany. After serving, he moved to Pittsburg, KS, where he and Lori lived for 18 years. While there, they were blessed with their daughter, Lindsey. In 2004, Ryan and Lori moved back to Fredonia, KS. He spent time working at Systech Environmental, LMI, and was currently employed at Cobalt Boats. Outside of work, Ryan loved spending time with his family. He enjoyed camping, paddle boarding, kayaking with his family, and he and Lindsey loved playing golf together, going to rodeos, and watching ice hockey. He was a huge fan of the Kansas City Royals and Kansas City Chiefs. When he would tell his friends about the family vacations, he might not tell them where they went, but he made sure to tell them everyplace they ate. Ryan was a loving husband and great dad. He will be missed by all of his family and many friends. He is survived by his wife, Lori Daughter, Lindsey Ramos Freitas and husband Hélio Rui of Denton, TX Mother, Susie Oneal of Fredonia, KS Siblings, Sheri Moya and husband Edward of Fredonia, KS, Chad Oneal and wife Tosha of Fredonia, KS Aunts and Uncles, Jack (Elaine) Oneal of Seattle, WA, Jim Oneal of Fredonia, KS, Del (Cathy) Resser of Wichita, KS, Jerry Resser of Wichita, KS In-Laws, Joe and Peggy Smith of rural Neodesha, KS Sister-in-law, Valerie Smith of rural Elk City, KS Niece and nephews, Hayden, Heston, Holton, Zachary, Brenna, Conner, Brayden, Ashton He was preceded in death by his father, Jerry Oneal, and brother-in-law, Andy Smith The family will receive friends at visitation from 5:00 to 7:00 PM on Wednesday, September 29, 2021 at Countryside Funeral Home in Fredonia, KS Private graveside services will be held Memorial contributions can be made to the Fredonia Girls Golf team and can be mailed to or left with the funeral home. Services entrusted to Countryside Funeral Home, 420 S. 20th, PO Box 247, Fredonia, KS 66736

The family of Ryan Dean Oneal created this Life Tributes page to make it easy to share your memories.

Send flowers to the Oneal family.