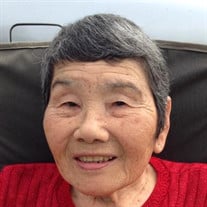 Sachiko Kuda Edwards, age 84, died peacefully surrounded by her children after battling Alzheimer’s on May 22, 2021. She was born on October 10, 1936, on the island of Anguar, the Republic of Palau, in the West part of the Pacific Ocean. She was the youngest of two brothers, two sisters, and one half-sister. Sachiko was 6 years old when World War II began. After the war, the family settled on the island of Okinawa, Japan. She met and married an American Marine, Kenneth LaVaughn Edwards in 1958 and had 2 children while in Okinawa: Barbara Kay and Sherile Vonne. Upon being stationed at Kansas City, MO, she had Daniel Joseph, Sandra Lynne, and Loretta Marie. Sachi was proud to obtain United States citizenship. The family moved to Elk Falls, Kansas, while Kenny served in the Vietnam War. After Kenny’s return, the family moved to Camp Pendleton, California, then moved to 29 Palms, California until Kenny retired in 1976. The family moved back to Elk Falls, Kansas, where Sachi enjoyed fishing, gardening, canning, and helping Kenny with any projects that needed to be done. She worked 18 years for a state program in which she provided home care for those in need. Sachi was baptized at the Osage Hills State Park in Oklahoma and was very active in her Unamended Christadelphian faith. She was preceded in death by her parents Tomoyuki and Kama Kuda, and her oldest brother, Tomamasa Kuda, her husband of 42 years Kenneth Edwards, and one great-grandson Owen Cannon. She is survived by children Barbara (Harold) Cannon of Longton Sherile (Kenneth) Folk of Longton Daniel (Cheryle) Edwards of Yates Center Sandra (Terry) Tuck of Elk Falls Loretta (Rusty) Arnold of Independence 16 grandchildren, and 18 great-grandchildren several extended family members and friends. Family and friends are invited to attend a Celebration of Life at Countryside Funeral Home in Howard, Kansas, on May 28, 2021, at 10:30 AM. If desired, friends and family can make donations to the Longton Unamended Christadelphian Ecclesia, and can be mailed to or left with the funeral home. Services entrusted to: Countryside Funeral Home, 206 E. Washington, PO Box 1233, Howard, KS 67349

Sachiko Kuda Edwards, age 84, died peacefully surrounded by her children after battling Alzheimer&#8217;s on May 22, 2021. She was born on October 10, 1936, on the island of Anguar, the Republic of Palau, in the West part of the Pacific Ocean.... View Obituary & Service Information

The family of Sachiko Kuda Edwards created this Life Tributes page to make it easy to share your memories.

Send flowers to the Edwards family.