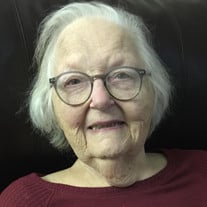 Sara Kathryn (Kathy) Davis, age 80, of Wichita, formerly of Howard, KS, passed away on Thursday, September 17, 2020, at St. Francis-Harry Hynes Memorial Hospice in Wichita. Kathy was born on December 7, 1939, in Omaha, NE, the daughter of James Robert and Lulu (Burns) Shocklee. Kathy moved around a lot as a child, as her father worked in construction. She attended 17 different schools while growing up and was a graduate of El Dorado High School. While working at her mother’s café waiting tables, Kathy met Ted Davis, who was attending college in El Dorado. On May 10, 1958, they were married at the First Methodist Church in El Dorado. Four children were born to this union. Ted and Kathy were married for 55 years, until his death on April 6, 2013. The young couple moved to Moline, KS in 1959, where they went into a partnership with Ted’s parents, operating a dairy farm. Kathy worked at the Moline Mercantile a short time, and then for the Elk Co. District Attorney, where she learned tax preparation. Eventually, she started her own bookkeeping and tax preparation service, serving Elk Co. for a total of 47 years. After moving to Howard, KS in 1968, Kathy also worked for the post office, helped Ted on the farm, served as bookkeeper for Ted D. Davis Farm Equipment and Ted’s Auto Sales. Kathy was very fun-loving. She enjoyed any gathering of friends, sewing, crafting and quilting. She owned and operated Mom’s Quilt Works for a number of years and also taught quilting classes through Independence Community College in the surrounding communities. In 2011, Kathy moved to Wichita to live with her daughter, Tamara, and family, where she continued quilting, traveling and collecting fabric from all the states they visited. Kathy is survived by her children, Matthew Davis and wife Ruth Ann of Neodesha, KS; Tamara (Tammy) Bobb and husband Tim of Wichita, KS; Mark Davis of Parker, KS; Trisha Davis of Wichita, KS; 10 grandchildren; 3 great-granddaughters; and a half-brother, Gene Jensen and wife Vivian of Lincoln, NE. Kathy was preceded in death by her parents and husband. Funeral services will be held on Friday, September 25, 2020, at 1:00 PM, at the First Baptist Church in Howard. Burial will follow at Grace Lawn Cemetery. Memorials in Kathy’s name have been suggested to the Howard Friendship Meals and may be left with or mailed to the funeral home. Online condolences may be left at www.countrysidefh.com. Services entrusted to: Countryside Funeral Home, 206 E. Washington, P.O. Box 1233, Howard, KS 67349

The family of Sara Kathryn "Kathy" Davis created this Life Tributes page to make it easy to share your memories.

Send flowers to the Davis family.