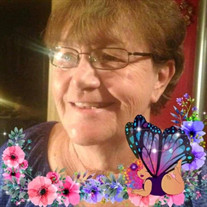 Sharon Marlene “Pork” Dory, age 73 of Grenola, KS passed away September 11, 2020 at her home. Sharon was born August 4, 1947 in Portland, OR to Alvin and Margaret (Hodges) Youngs. She grew up and attended schools in Gresham, OR alongside 13 siblings. On July 1, 1963, Sharon married Richard Dory, Sr. in Oregon City, OR. In 1967, they made the move to Kansas when Richards’ mom and dad moved here. Together, they raised 3 children and were married 49 years, until his passing in October 2012. Sharon worked a few different jobs through her life, but her career was being a housewife, mom, and grandma. She loved her kids and truly enjoyed being grandma. She will be missed by all that knew her. Sharon is survived by her children: Richard (Tina) Dory Jr. of Winfield, KS Kathlene (Monty) Hart of Longton, KS Charlene (Phillip) Bosley of Independence, KS 6 grandchildren, and 8 great-grandchildren Sisters: Alice (James) Joseph of Sandy, OR Sarah (Jerry) Jones of Boring, OR Geroldine Crum and Eric of Madras, OR Loretta Stufflebean of Gresham, OR She was preceded in death by her parents; brothers, George, Ernie, John, Martin; sisters, Ruby, Mary, Cora, Shirley, and Betty Graveside service for Sharon will be held on Thursday, September 17, 2020 at 1:00 pm at Green Lawn Cemetery, Grenola, KS Memorial contributions can be made to the American Cancer Society and can be mailed to or left with the funeral home. Services entrusted to: Countryside Funeral Home, 206 E. Washington, PO Box 1233, Howard, KS 67349

The family of Sharon "Pork" Dory created this Life Tributes page to make it easy to share your memories.

Send flowers to the Dory family.