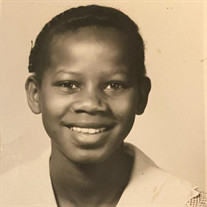 Shelley Celeste Johnson, 67, of Chanute, KS, transitioned from earth to glory on Monday, November 9, 2020, at her home. Shelley was born on July 13, 1953, in Chanute, KS, the daughter of Ray Andrew and Lois Berneice (Grubbs) Bossell. She was educated in the local school system graduating from Chanute High School, class of 1971 after competing vigorously in sports, mastering basketball, and softball. Athletic prowess was just one of her many gifts. Shelley gave her life to Christ at a young age and is remembered to sing God’s praises with her sisters and congregants at New Hope Baptist Church, where she sang, ushered, cleaned, and served. She also was a choir member and a Sunbeam Youth Director. You could not find a spot in her home (or yours) that Shelley wasn’t cleaning! She enjoyed cooking and cleaning. She worked at local motels, but her main job was taking care of her family and home. Shelley was married to Robert Johnson; to this union, her son George was born. Her other daughters include Tiffany Jean, Shelley Nicole, and Tanika Bossell. Shelley lived 27 years in Kansas City, creating a community of friends that grew to love her as well. Shelley was preceded in death by her parents, daughter Shelley Nicole Bossell and siblings Gary Lee Bossell, Dennis Ray Bossell, and Stephanie Gayle Bossell. Shelley leaves a legacy of love in surviving family members; children George (Melanie) Johnson of Leavenworth, KS., Tiffany Jones of Kansas City, KS, and Tanika (Isaac Lawrie) Bossell of Tulsa, OK., nine grandchildren; Jaslynn and J’Vontae Phifer, Jamarion Rhone, Jarius Bossell, Alkymmi Sherman, Zion Jones, Trey, Xavier, and Maya Raney Johnson, siblings; Norman Bossell of Pullealup, WA, Drew Walls of Chanute, KS., Jerry Bossell (Elaine) of Kansas City, MO and Marsha Brown (David) of Kansas City, MO. Funeral services will be held on Friday, November 13, 2020, at 12noon at the First Baptist Church in Chanute. Visitation will be held from 10:00 a.m. -12:00 p.m. with cremation to follow the service. Memorials have been suggested to the American Lung Association and may be forwarded to the funeral home. Online condolences are being received at www.countrysidefh.com Services entrusted to: Countryside Funeral Home 101 N. Highland, Chanute, KS 66720

Shelley Celeste Johnson, 67, of Chanute, KS, transitioned from earth to glory on Monday, November 9, 2020, at her home. Shelley was born on July 13, 1953, in Chanute, KS, the daughter of Ray Andrew and Lois Berneice (Grubbs) Bossell. She was... View Obituary & Service Information

The family of Shelley Celeste Johnson created this Life Tributes page to make it easy to share your memories.