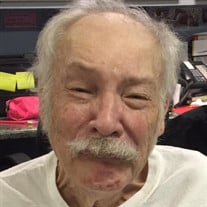 Shirley Dean Gulick 80 of Fredonia passed away Monday, July 22, 2019 at Diversicare in Chanute. Shirley was born on September 24, 1938 in Toronto, Kansas the son of Jess and Dora (Parsons) Gulick. On July 14, 1964 in Tulsa, OK Shirley married Daisy Pearl Barnhart. Shirley and Daisy were married for 53 years until her death of December 2017. Shirley worked many years for Wilson County as a truck driver. Shirley enjoyed working on his farm and making up names for his animals. He enjoyed playing dominoes, pitch and Uno. When he could be outside he liked pitching horseshoes, playing badminton, and softball. Most of all he liked watching his grandchildren play in the yard. Shirley is survived by: Son: Merle Gulick of Fredonia, KS Daughters: Christina Gulick of Sapulpa, OK April Gulick of Fredonia, KS Laura Roach of Helena, MT 7 Grandchildren: Amber Gallegos of Bixby, OK, Heather Paine of Sapulpa, OK, Briana Boyles of Nowata, OK, Brandon Gulick of Fredonia, KS, Kaci Roach of Helena, MT, Skyeler Gallegos of Sapulpa, OK, and Diamond Hilton of Sapulpa, OK 6 Great Grandchildren Shirley was preceded in death by his parents, wife Daisy and 13 brothers and sisters Funeral services will be held Thursday, August 1, 2019 at 11:00 AM at Countryside Funeral Home in Fredonia, with burial to follow at the Fredonia City Cemetery. Visitation will be held on Wednesday, July 31, 2019 from 5-7 PM at the funeral home. Memorials have been suggested to the American Diabetes Association and may be left with or mailed to the funeral home. Online condolences may be left at: www.countrysidefh.com Services entrusted to: Countryside Funeral Home 420 S. 20th St., P.O. Box 247, Fredonia, KS 66736

Shirley Dean Gulick 80 of Fredonia passed away Monday, July 22, 2019 at Diversicare in Chanute. Shirley was born on September 24, 1938 in Toronto, Kansas the son of Jess and Dora (Parsons) Gulick. On July 14, 1964 in Tulsa, OK Shirley married... View Obituary & Service Information

The family of Shirley Dean Gulick created this Life Tributes page to make it easy to share your memories.

Send flowers to the Gulick family.