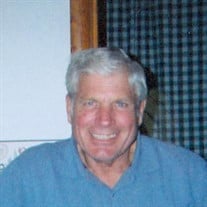 Spencer Lee Brandon, age 77, of Chanute, KS, passed away on Tuesday, September 17, 2019 in Chanute, KS. Spencer was born on April 17, 1942 in Chanute, KS the son of Buddy Brandon and Erma McDowell. Spencer married Janice Fisher in 1961 and they later divorced. On December 10, 1982, he married Donna (Sturdivan) Childers in Paola, KS; she survives him at the home. Spencer worked as a lineman and later the head of the electric meter department for the City of Chanute until his retirement. He enjoyed fishing and doing yard work and he took pride in how his yard looked. When he was younger, he loved to race cars and then later enjoyed collecting old cars. He was a lifetime member of the Elks and was a member of the Otterbein United Methodist Church in Chanute. Spencer is survived by his Wife: Donna Brandon Children: Tim Brandon and wife Tammy of Sand Springs, OK Tammy Schillings and husband Pat of Tulsa, OK Todd Brandon of Chanute, KS Mark Childers and wife Susie of Chanute, KS Marsha Bryon and husband Tom of Leewood, KS Kim Childers and wife Kim of Louisburg, KS Karen Martin and fiancé Phillip Stich of Chanute, KS Siblings: Barbara Meador of Raymore, MO Laura Brandon of Bartlesville, OK Dean Brandon and wife Andrea of Woodland Shores, OK Sister-in-Law: Nancy Brandon 23 Grandchildren Numerous Great Grandchildren He is preceded in death by his parents, sister, Shirley Brandon and brother, Wayne Brandon. Cremation has been requested. A memorial service will be on Tuesday, September 24, 2019 at 11 a.m. at Otterbein United Methodist Church in Chanute, KS. Online condolences may be left at: www.countrysidefh.com. The family suggests memorials to be made to USD 413 Foundation Chanute High School Wrestling or FireEscape Coffeehouse and may be left with or mailed to the funeral home. Arrangements have been entrusted to Countryside Funeral Home, 101 N. Highland, Chanute, KS 66720.

The family of Spencer Lee Brandon created this Life Tributes page to make it easy to share your memories.

Send flowers to the Brandon family.