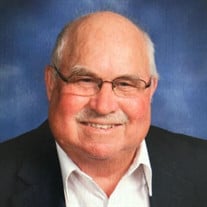 Stanley H. Luebbering, 82, of Chanute passed away on Sunday, August 29, 2021. Stanley was born on May 19, 1939 in St. Thomas, MO. the son of Anthony and Eleanor (Wilde) Luebbering. Stanley was born on the family farm, attended school and served in the Missouri National Guard. He continued his hard work ethics in the construction industry and later became a co-founder of Advanced Systems Homes. Stanley enjoyed playing golf when he could, having fun with his friends, but most importantly, caring for his family. Stanley was a member of St. Patrick's Catholic Church, and previously served as president of the Chanute Country Club. On October 25, 1967, Stanley married Mary Elizabeth Ketterlin, they were married for 29 years until her death on February 7, 1997. Stanley stood strong in his belief of work hard, play hard and pray harder. Stanley is survived by: Three Sons: Douglas Luebbering and wife Stephanie of Olathe, KS Darin Luebbering and wife Kim of Chanute, KS Scott Luebbering of Chanute, KS Two Brothers: Earl Luebbering of Sedalia, MO Harry Luebbering of Batavia, IL Six Grandchildren Stanley was preceded in death by his parents, wife Mary Elizabeth and sisters: Dorothy Wallenmeyer, Eunice Lappat, Ethel Wolf, Betty Gerkie and a brother Paul Luebbering. Mass of Christian burial will be held on Friday, September 3, 2021 at 10:00 am at St. Patrick's Catholic Church in Chanute with burial to follow at St. Patrick's cemetery. Rosary will be recited on Thursday, September 2, 2021 at 7:30 pm at St. Patrick's Catholic Church. Memorials have been suggested to the Stanley H. Lubbering Vocational Educational Scholarship Fund and may be left with or mailed to the funeral home. Online condolences may be left at: www.countrysidefh.com Services entrusted to Countryside Funeral Home 101 N. Highland, Chanute, KS 66720

The family of Stanley H. Luebbering created this Life Tributes page to make it easy to share your memories.

Stanley H. Luebbering, 82, of Chanute passed away on Sunday,...

Send flowers to the Luebbering family.