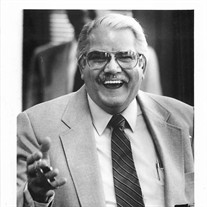 Thomas Leroy McLaren passed away on Wednesday, September 23, 2020 at his home. Thomas was born on January 6, 1935 in Chanute, KS the son of Harold N. and Louise (Whitemore) McLaren. After high school, Thomas joined the U.S. Army. Upon his return from the service, Thomas worked as a Professional Union Meat Cutter. In 1968 Thomas began working for the Chanute Police Department, working his way up to Detective and when he retired in 1991, he was the assistant Chief of Police. In 1959, Thomas married Marcilee Andrews and she passed away in March of 1962. On December 13, 1965 he married Margaret L. Sattler and she survives at their home. Thomas was a member of the First Baptist Church. He loved to read and learn new things. He enjoyed wood working, and built a lot of cabinets for people in the area. He was a Life member of the VFW, Elks, and a member of the Masonic Temple, the Order of the Eastern Star, Shriner’s and a member of the National Association of the Atomic Veteran’s. Including his wife Margaret, Thomas is survived by: Three Children: David L. McLaren and wife Julie of Frontenac, KS Barbara W. Ward of Chanute, KS Christine S. Mason and husband Rick of Chanute, KS One Sister: Carol Fairchild of Kansas City, KS 8 Grandchildren and 10 Great Grandchildren Thomas was preceded in death by his parents and step father Cline Davenport, Brother David W. Davenport and first wife Marcilee and son-in-law Rick Ward. Visitation will be held on Saturday, September 26, 2020 from noon until 2:00 PM at the funeral home. Cremation will follow. Memorials have been suggested to either the Veteran’s Honor Flight or the Wounded Warrior’s Project and may be left with or mailed to the funeral home. Online condolences may be left at: www.countrysidefh.com Services entrusted to: Countryside Funeral Home 101 N. Highland, Chanute, KS 66720

Thomas Leroy McLaren passed away on Wednesday, September 23, 2020 at his home. Thomas was born on January 6, 1935 in Chanute, KS the son of Harold N. and Louise (Whitemore) McLaren. After high school, Thomas joined the U.S. Army. Upon his... View Obituary & Service Information

The family of Thomas Leroy McLaren created this Life Tributes page to make it easy to share your memories.

Send flowers to the McLaren family.