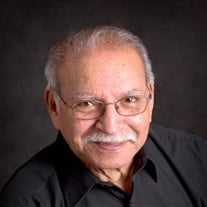 Thomas “Tom” Florez Sr, age 88 of Fredonia, KS, passed away Wednesday, June 30, 2021 at his home. Tom was born September 22, 1932 in Fredonia, KS, to Juan and Epitacia (Pacheco) Florez. He was born in one of four boxcars on 3rd street. There was a family in each on and there was tar paper on these cars to give them insulation from the cold. Tom’s dad and his 2 brothers had come to America in 1916 to get away from Poncho Villa, as they were going to have to go with his group, or die. Tom’s mother passed away when he was only 14 years old, and his father raised him alongside 6 siblings, making sure all of his children were first generation citizens. He also made sure they all received an education, sending them all to Fredonia schools. In 1952 Tom met a young lady named Pauline Lopez DeLaTorre at a Christian Youth Organization dance in Parsons. Later that year, on December 13th, they were married in Kansas City. Together, they raised 5 children, and enjoyed over 68 years together. They lived in Kansas City where Tom worked for Macy’s department store as a window trimmer. That job didn’t pay enough, so he went to work for a metal die company for a time before the young couple moved back to Fredonia in the mid 50’s. He went to work for Bunches Florist and Blankenship Mum Farm northwest of Fredonia before going to work for Kennedy Printing Company in 1957, which later became LaDow and Spohn Stationary, retiring from there in 1997 after 40 years. Tom enjoyed many things in life like taking his kids to the mum farm with him while he worked and letting them just play, or taking his sons fishing with him. Later in life, he enjoyed making his rounds around town to all the convenience stores to just visit with people. He would buy lottery tickets while he was there. He loved sitting on his front porch watching people go by and would often mow other peoples yards for the fun of it because he just loved to mow. He also enjoyed working with wood and would make things like benches and toys. He was a collector of many toys and enjoyed making enchiladas with Pauline and the great-grandkids. He and Pauline enjoyed an occasional trip to the casino and cherished the family dinners they would have. Tom was an onery man that loved to play tricks on others. He was a member of the Sacred Heart Parish and the Knights of Columbus. He loved sports, especially the Kansas City Chiefs and the Kansas City Royals. He loved his family and friends with all his heart. He was proud to be a dad and grandpa and was even still known as grandpa by grown kids that were in Pauline’s daycare years ago. Tom is survived by his wife, Pauline Children: Teresa Apollo and husband Logan of Fredonia Elizabeth Cox and husband Timothy of Iola Thomas Florez, Jr and wife Melissa of Fredonia John Florez of Fredonia Ann Huser and husband Roger of Fredonia 19 grandchildren and 28 great-grandchildren Brother, Chris Florez of Fredonia and Sister, Valentina Zacharias of Pittsburg He was preceded in death by his parents, siblings, Juanita Garcia, Daria Baker, Eulalia Wilson, Joe Florez and grandson Camron Huser Visitation will be held from 5:00 to 7:00 PM on Tuesday, July 6, 2021 at Countryside Funeral Home, Fredonia, KS Mass of Christian burial will be held at 10:30 AM on Wednesday, July 7, 2021 at Sacred Heart Catholic Church in Fredonia. Rosary will be recited at 10:00 AM prior to service Inurnment will follow in Sacred Heart Cemetery in Fredonia Memorial contributions can be made to Fredonia Hometown Healthcare and Hospice and can be mailed to or left with the funeral home. Services entrusted to Countryside Funeral Home, 420 S. 20th, PO Box 247, Fredonia, KS 66736

The family of Thomas "Tom" Florez Sr. created this Life Tributes page to make it easy to share your memories.

Send flowers to the Florez family.