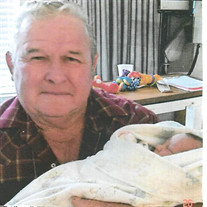 Thomas “Tom” Gene Tuck, age 80 of Longton, KS, passed away September 2, 2020 at Labette Health in Independence, KS. Tom was born November 10, 1939 at the home place in rural Longton, KS to William and Iva (Farnsworth) Tuck. He was raised alongside 1 brother, and 2 sisters. He attended a country school in Elk County through the 8th grade. On February 27, 1957, Tom married Nancy Josephine Corle. They raised 4 children together, and were married 57 years, until her passing in January 2015. They lived in Elk County all their lives, including the towns of Elk Falls, Moline, and Longton. Tom was a heavy equipment mechanic and operator, and worked in the Martin Marietta rock quarry for over 35 years. He enjoyed hunting and fishing when he could, but spent most of his spare time looking after his cattle. Tom is survived by: Daughter: Tammy and Jerry Denney of Cimarron, KS Sons: Thomas and Melody Tuck of Elk City, KS Terry and Sandy Tuck of Elk Falls, KS Kevin Tuck and Janet Cox of Fredonia, KS Sister, Betty Corle of Coffeyville, KS Grandchildren: Serena and Ben Kill of Longton, KS Tony Tuck of Kansas City, KS Thaddeus Tuck of Bentonville, AR Great-grandchild, Braden He was preceded in death by his parents William and Iva; sister, Iva Walker; and brother, William Jackson Tuck Memorial service for Tom will be held on Saturday, September 5, 2020 at 11:00 am at the Elk Falls Cemetery, Elk Falls, KS Memorial contributions in Tom’s name can be made to the Calvary Chapel of Elk Falls and can be mailed to or left with the funeral home. Services entrusted to: Countryside Funeral Home, 206 E. Washington, PO Box 1233, Howard, KS 67349

The family of Thomas "Tom" Tuck created this Life Tributes page to make it easy to share your memories.

Send flowers to the Tuck family.