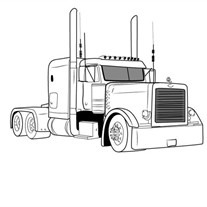 Thomas “Termite” Watts, age 57 of Howard, KS passed away August 24, 2020 in Nashville, Tennessee. Tom was born August 12, 1963 in Eureka, Kansas to Kenneth and Ruth (Chittenden) Watts. He grew up alongside one sister, Christy and attended West Elk schools. Tom worked several jobs through his life, including being a heavy equipment operator for Sherwood Construction Company, working as a pulling unit hand for B & J Well Service, construction work for Johnson Drywall building homes, truck driver for Frank Bills, and most recently driving a truck as a self-employed truck driver/owner. Tom lived life fully. What other people thought didn’t concern him, he did what he wanted, and he did it when he wanted to do it. He liked to fish and shoot guns, and he really liked setting at Sweet and Spicy restaurant talking to people. He was very proud of being a volunteer firefighter for the City of Howard as well as Elk County Rural Fire, and he loved helping with the Jaws of Life when needed. Tom is survived by his mother, Ruth Watts of Howard, KS Sister, Christy Tyler and husband Don Smith of Howard, KS Nephews: Kenny Tyler and wife Miranda of Derby, KS Billy Tyler and wife Harley of Wamego, KS Niece, Heather Houchin and husband Ben of Howard, KS 10 Great nieces and nephews He was preceded in death by his father, Kenneth Watts. A memorial service will be held on Friday, August 28, 2020 at 3:00 pm at Countryside Funeral Home, Howard, KS Inurnment will take place at a later date. Memorial donations in Toms’ name can be made to Countryside Funeral Home to help with final expenses.

The family of Thomas "Termite" Watts created this Life Tributes page to make it easy to share your memories.

Send flowers to the Watts family.