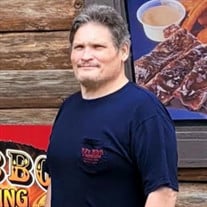 Todd Jay Brandon, 52, of Humboldt passed away on Friday, April 15, 2022 at Menorah Medical Center in Overland Park, Kansas. Todd was born on October 28, 1969, in Chanute, Kansas, the son of Spencer and Janice (Fisher) Brandon. Todd grew up in Chanute and was a star athlete, winning a state championship in wrestling and excelling at football. Following his successful high school career, Todd played football at Fort Scott Community College on a scholarship. After playing football, he attended welding school in Tulsa, Oklahoma. Upon graduation from welding school, Todd began working at Chanute Manufacturing as a welder/boilermaker for many years. He was regarded as being the very best welder. Following a successful career as a welder, Todd began cooking kettle corn; he would sell it on various street corners around town and even travel around to county fairs selling it. To many people that had his kettle corn, it was the absolute best. In 2019, Todd and his lifetime partner Jackie Borjas opened TJ’s BBQ in Humboldt. Cooking was Todd’s passion, and if you ever had his burnt ends, you would know that he was given an absolute gift for barbecue. His restaurant was featured in Midwestern Living Magazine and the Kansas City Star. His ultimate dream was to be on Diner’s, Drive-ins, and Dives, and when you went into the restaurant it was always playing. In his spare time, Todd loved watching Street Outlaws and Diner’s, Drive-ins, and Dives. He also loved spending as much time as he could with Jackie and watching Kansas City Chiefs games with her. Todd will always be known as someone that wanted to please people as much as he could, being a friend to anyone that he met, and always having the attitude that he had to be the best. He will be greatly missed by all of those that knew him. Todd is survived by: His lifetime partner: Jackie Borjas of Humboldt, KS Step-Children: Linda Farrill and her husband Virgil of Humboldt, KS Amanda Bain of Humboldt, KS Alan Bain of Iola, KS Step-Mother: Donna Brandon of Chanute, KS Three Brothers: Tim Brandon and his wife Tammie of Sand Springs, OK Mark Childers and his wife Susie of Chanute, KS Kim Childers and his wife Kim of Louisburg, KS Three Sisters: Tammy Brandon Schillings of Tulsa, Ok Marsha Bryon and her husband Tom of Leawood, KS Karen Martin Stich and her husband Phillip of Chanute, KS Many cousins including Keith Brandon, Barry Brandon, and Brian Jeffers who were like brothers Many nieces and nephews Two Sisters-In-Law: Carla Combes and her husband Cordell of Lebo, KS Lisa Adams and her husband Jeff of Emporia, KS Brother-In-Law: Joe Borjas and his wife Melissa of Mission, KS Todd was preceded in death by his parents and his grandparents. A celebration of life service will be held on Saturday, April 23, 2022 at 1:00 pm at Countryside Funeral Home. Memorials have been suggested to the Chanute Wrestling Club and may be left with or mailed to the funeral home. Online condolences may be left at: www.countrysidefh.com. Services entrusted to Countryside Funeral Home 101 N. Highland, Chanute, KS 66720.

Todd Jay Brandon, 52, of Humboldt passed away on Friday, April 15, 2022 at Menorah Medical Center in Overland Park, Kansas. Todd was born on October 28, 1969, in Chanute, Kansas, the son of Spencer and Janice (Fisher) Brandon. Todd grew up in... View Obituary & Service Information

The family of Todd Jay Brandon created this Life Tributes page to make it easy to share your memories.

Todd Jay Brandon, 52, of Humboldt passed away on Friday, April...

Send flowers to the Brandon family.