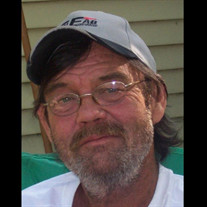 Tommy Joe Smith, age 67, passed away March 22, 2021 in Coyville, KS. Tommy was born to Clyde & Erma (Cook) Smith on December 29, 1953 in El Dorado KS. He was blessed with 5 brothers and 1 sister. Tommy graduated from Leroy High School after working on the road for a couple of years, graduating with some his younger siblings. Tommy’s nickname “Short Snort” was earned while playing Football in High School. Tommy helped build the Wolf Creek Power Plant from the ground floor, staying there until it was all finished. In all, he worked over 30 years as a pipeline welder. Tommy moved to Wyoming and worked for Elkhorn Construction as a Pipeline welder. This is where he met his wife, Tara Passey, who talked him into moving to Kansas. Tommy and Tara were married on April 15, 1993. Tommy was a very loving man, and respectable to everyone he met. He loved his family, and was a proud Grandpa, raising two of his grandchildren. When he wasn’t busy, Tommy loved to fish for Catfish. His love for all his nieces and nephews was apparent in the hugs he gave. And he always had either cookies or candy in his rig truck and at home when they came to visit. Tommy was never too busy to argue a good point. Most of all, his family was the most important thing to him. Tommy is survived by his wife Tara of the home, Stepson: Jason (Laurissa) Palmberg of Henderson, Nevada Brothers: Jackie (Nancy) Smith of Coyville, KS Clyde (Marlene) Smith of Toronto, KS 2 Grandchildren: Kara and Vincent Marr of the home 3 Step-Grandchildren He was preceded in death by his parents, Children Misty Martin and Jill Johnston Siblings Donald Smith, Lonnie Smith, Floyd Smith & Penny Lewis Cremation has been requested with no services planned at this time. Donations may be made to the American Cancer Society in his name, and can be mailed to or left with the funeral home. Services entrusted to: Countryside Funeral Home, 420 S. 20th, PO Box 247, Fredonia, KS 66736

The family of Tommy Joe Smith created this Life Tributes page to make it easy to share your memories.

Send flowers to the Smith family.