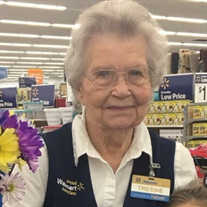 Tressie L. Gossett, 97, of Chanute, passed away at her home on Thursday, March 4, 2021, surrounded by loved ones. Tressie was born on August 22, 1923 in Casa, Arkansas the daughter of William E and Annie F. (Mitchell) Cravens. At the age of 3 months, Tressie's family moved to Hominy, OK by covered wagon, where she grew up on the family farm and graduated from Peru, OK Schools. In 1942, Tressie married Lawrence Wikel, they moved to Texas while Lawrence was in the service, after his discharge they moved to the Great Bend, KS and surrounding areas for the next 18 years, to this union, 6 children were born. Tressie and Lawrence later divorced. In 1967, Tressie moved to Chanute, KS and on April 10, 1970, Tressie married Neil N. Gossett. Tressie and Neil were married for the next 13 years until Neil's death in 1983. Tressie was a waitress at the former Holiday Inn, Self Service Grocery Store and retired as a cashier from Wal Mart at the young age of 93. Tressie is survived by: Children: Cecil Wikel of Midwest City, OK Monte Wikel of Chanute, KS Tina Jack of Chanute, KS William Gossett of Brighton, MN 8 Grandchildren: Stephanie Hutson, Gary Lynn Wikel II, Angela Jack, Stacy Evans and Larry J. Evans. Katie Smith, Annette Brooks 9 Great Grandchildren: Kaydin, Kylee and Kyndall Hutson, Ryan, Aaron, and Kevin Jack, Eric and Megan Wikel, Celesta Davis 3 Great Great Grandchildren: Addison, Taylen and Madeline Davis Tressie was preceded in death by her parents, husband Neil, children: Larry Wikel, Gary Wikel, Steven Wikel, John Gossett siblings: Dolly Frazier, twin sister Dessie, Dudley Cravens, Lige Cravens and Icie Haile. Funeral services will be held on Wednesday, March 10, 2021 at 11:00 am at the First Baptist Church in Chanute with burial to follow at Memorial Park Cemetery. Visitation will be held on Tuesday, March 9, 2021 from 5-7 pm at the funeral home. Memorials have been suggested to the First Baptist Church and may be left with or mailed to the funeral home. Online condolences may be left at: www.countrysidefh.com Services under the direction of Countryside Funeral Home 101 N. Highland, Chanute, KS 66720

Tressie L. Gossett, 97, of Chanute, passed away at her home on Thursday, March 4, 2021, surrounded by loved ones. Tressie was born on August 22, 1923 in Casa, Arkansas the daughter of William E and Annie F. (Mitchell) Cravens. At the age of... View Obituary & Service Information

The family of Tressie L. Gossett created this Life Tributes page to make it easy to share your memories.

Send flowers to the Gossett family.