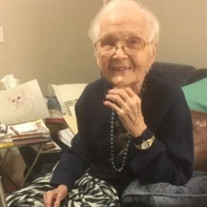 Velma Lorene (Glazier) Roby, age 98 of Bartlesville, OK passed away November 20, 2019 at The Journey Home in Bartlesville, OK. Velma was born May 30, 1921 in Moline, KS to Harvey and Nettie (Stiles) Glazier. She grew up in Moline following two much older brothers, Lewis and Vernie, and a slightly older brother, Bruce. All four graduated from Moline High School. After high school, Velma attended Business College in Miami, OK, in preparation for going to Washington, DC. Velma arrived in Washington in the summer of 1941 as a new clerical hire of the War Department. When the news came of the bombing of Pearl Harbor, she and her new friends went to view the Japanese Embassy and were able to see the burning of records there before the Embassy was evacuated. Later she was chosen as one of the first seven thousand War Department employees to transfer to the nearly completed and massive Pentagon. After years of dating, Velma married Jack Roby in Mineral Walls, TX where he was stationed at Camp Walters on September 22, 1943. Their only child, Bruce, was born there in August, 1945, and Jack was discharged in December, 1945. Velma and Jack immediately returned to Jack’s home town, Pittsburg, Kansas until Jack was hired by the Sherwood Construction Co. in Independence, Kansas. In 1956 they bought the King Apartments in Independence, which they owned until 1970. Later they bought and operated the Credit Bureau of Tucumcari, New Mexico. Jack died from a fall there in 1983. Velma continued to operate the bureau there for a few more years, and also served as president of the local Women’s Methodist Association. After later selling the credit bureau, she retired to Bartlesville. In Tucumcari and Bartlesville, Velma expanded her mostly self-taught painting talents to add painting of cards, shirts, and miniature canvases for gifts and requests of family and friends. Hundreds of people have enjoyed her works. Velma is survived by her son Bruce Roby and his wife Charlene of Topeka, KS; granddaughter Allison (Jeff) Folger and great-grandsons Marcus and Simon of Topeka, KS; grandson David (Jennifer) Roby and great-granddaughter Madeleine of Arlington, VA; and numerous nieces and nephews. She was preceded in death by her parents, husband Jack, and brothers Vernie Glazier, Lewis Glazier, and Bruce Glazier. Funeral services for Velma will be held on Saturday, November 30, 2019 at 11:00 am at Countryside Funeral Home, 206 E. Washington, Howard, KS 67349. Visitation will be held for 30 minutes before services. Burial following the service will be at the Moline Cemetery. Memorial contributions in Velma’s name can be made to The Journey Home hospice, 900 Washington Blvd., Bartlesville and can be left with or mailed to the funeral Home. Services entrusted to: Countryside Funeral Home, 206 E. Washington, P.O. Box 1233, Howard, KS 67349

Velma Lorene (Glazier) Roby, age 98 of Bartlesville, OK passed away November 20, 2019 at The Journey Home in Bartlesville, OK. Velma was born May 30, 1921 in Moline, KS to Harvey and Nettie (Stiles) Glazier. She grew up in Moline following... View Obituary & Service Information

The family of Velma Lorene Roby created this Life Tributes page to make it easy to share your memories.

Send flowers to the Roby family.