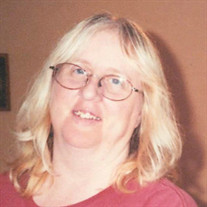 Virginia B. Brown, age 61 of Fredonia, Kansas, passed away Friday, January 1, 2021 at Fredonia Regional Hospital in Fredonia, Kansas. Virginia was born June 29, 1959 in Little Rock, Arkansas to James and Emily (Chapman) Fulmer. She grew up alongside 3 sisters and 2 brothers. After high school, Virginia explored several different career paths before furthering her education and finding her true calling as a CNA, which she absolutely loved. On July 30, 1977, she married Steven Brown in Van Buren, Missouri. They enjoyed 42 years together, raising 5 children. While raising their family, Virginia and Steven lived in Missouri, Longton, Kansas, Las Vegas, Nevada, and eventually made their home in Fredonia. They enjoyed camping, and traveling. One of Virginia’s favorite trips was to travel to Estes Park, Co and stay in the Stanley Hotel. Virginia was a Sunday school teacher at the Faith Baptist Church in Fredonia, and would spoil those in her class. It showed who she really was, as she loved helping people. She was a special mother, grandmother, and great-grandmother who would do anything for her family. Virginia is survived by her husband, Steven Brown Children: April (Michael) Patten of Eaton, CO Kim Lemoine of Fredonia, KS Tracey (David) Ivey of Tulsa, OK Chad (Monica) Brown of Erie, KS Heather (Dwayne) Cornett of Fredonia, KS 11 Grandsons, 3 Granddaughters, 2 Great-Grandsons, and 3 Grand dogs Sisters: Marylin Grimsley of Boser City, LA Lois Hogan of Longton, KS Debbie Watson of Springfield, MO She was preceded in death by her parents, brothers, James and John, and grandson, Kenneth North Visitation will be held on Thursday, January 7, 2021 from 5:00 – 7:00 pm at Countryside Funeral Home in Fredonia, KS Funeral service will be held on Friday, January 8, 2021 at 1:00 pm at Faith Baptist Church in Fredonia, KS Interment will follow in Fredonia City Cemetery Memorial contributions can be made to the Fredonia Pound Pals and can be mailed to or left with the funeral home. Services entrusted to: Countryside Funeral Home, 420 S. 20th, PO Box 247, Fredonia, KS 66736

The family of Virginia B. Brown created this Life Tributes page to make it easy to share your memories.

Virginia B. Brown, age 61 of Fredonia, Kansas, passed away Friday,...