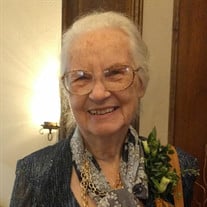 Virginia Louise Coble, 92, of Howard, Kansas passed away Tuesday, April 12, 2022 in Sedan. She was born on November 12, 1929 to Horace and Edith Marie (Simons) Copeland in rural Severy, Kansas. Virginia was a very creative and musical woman. She was a skilled seamstress, enjoyed quilting, gardening and painting – among other crafts. Her creativity came in handy after she married Harold Eugene “Gene” Coble in June of 1953 and they grew their family to include four children. Raising her family was one of her greatest joys in life, especially when her grandbabies came along. After their children had grown, Virginia pursued and earned a degree in nursing. She worked as an LPN at Twilight Manor in Howard and never seemed to stop learning. Virginia leaves behind her four children, all whom reside in Howard: Kathy (David) Evans Tim Coble Kristin (Rob) Hutchison Julia Coble Two sisters, both of Oklahoma City: Marcia Dean Wilma Cooley Five grandchildren: Aaron Evans Michael Evans Megan Hutchison-Amash Leah Hutchison Anthony Coble And five great-grandchildren Preceding her in death were: Her parents, Horace and Edith Her husband, Gene in December of 2000 Three brothers: Doyle Copeland, Ted Copeland and Bill Copeland And one sister, Madge Hebb Cremation has been requested. A memorial service will be held on Monday, April 18, 2022, 1:30 pm at Countryside Funeral Home in Howard, Kansas. Memorial contributions have been suggested to the American Legion, Carter Rader Post#0149 and can be mailed to or left with the funeral home. Online condolences can be left at www.countrysidefh.com. Services entrusted to Countryside Funeral Home, 206 E. Washington St., P.O. Box 1233, Howard, KS 67349.

Virginia Louise Coble, 92, of Howard, Kansas passed away Tuesday, April 12, 2022 in Sedan. She was born on November 12, 1929 to Horace and Edith Marie (Simons) Copeland in rural Severy, Kansas. Virginia was a very creative and musical woman.... View Obituary & Service Information

The family of Virginia Louise Coble created this Life Tributes page to make it easy to share your memories.

Send flowers to the Coble family.