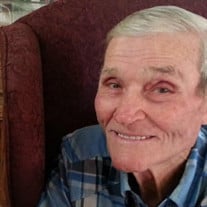 Walter E. Aday, 92, of Chanute, KS joined his true love in heaven on Monday, November 22, 2021, at the Neosho County Regional Medical Center in Chanute, Ks. Walter Edwin Aday was born June 17, 1929 in Talala, Ok., the son of Henry H. and Tera (Hammessley) Aday. Walter grew up with 11 brothers and 1 sister in rural Northeast Oklahoma. He was a mischievous child and grew into a fun-loving adult but remained a joker/prankster to family and friends alike. As a young child, he learned about God’s love, the value of hard work, and the importance of supporting and connecting with people, values that would become the bedrock for his life. Walter attended Talala High School where he excelled in academics as well as athletics. After graduation (in 1949), he attended Oklahoma A & M (Oklahoma State University) in Stillwater, OK. where he studied Engineering. Prior to graduation, he was drafted into the US Army during the Korean War. In 1952, he married Naomi Ruth Ellis on his 23rd birthday in Foyil, Oklahoma. After several moves due to the military and work, Walter and his family eventually settled in Chanute, KS where they raised their 3 children, daughter Retta Sue, son Walter Edwin, Jr. (Ed), and daughter Patty Jean. Walter was a long-time member of, and volunteer for, the Chanute First Baptist Church. Walter and Naomi were instrumental in the development of Cherry Street Youth Center in Chanute and volunteered their time at the center for many years, impacting the lives of countless youths in the community. Walter committed his life to helping others as is evidenced by his work with Promise Keepers and Boy Scouts. Walter believed in working hard and playing harder. He was a proud Santa Fe employee and held offices with the United Transportation Union working to improve conditions for all employees. In retirement, he worked with the “Friends of the 940” (a railcar restoration and preservation group) to move his caboose from his yard in rural Chanute (where it had been located for 28 years) to Bartlesville, OK where it is still on display today. In addition to his work with Santa Fe, he was a journeyman plumber, an avid bee-keeper, he owned and operated a railroad tie company and he purchased and remodeled homes with Naomi. For fun, Walter could be found sky-diving, water skiing and hunting almost anything. He enjoyed fishing, camping with his family in their 5th wheel and seeing the countryside. Walter felt his biggest honor was getting to enjoy his family, children, grandchildren and great-grandchildren. He helped organize the 1st Aday Family Reunion in 1980; a tradition that has continued every year since. He made sure his children, grandchildren, and great-grandchildren knew he loved them. He raised his children, and taught his grandchildren and great-grandchildren, to appreciate nature, value family, love God, work hard and play harder. He enjoyed watching his children and grandchildren play sports and coaching them in baseball and basketball. Walter is survived by his children, Retta (Steve Seger), Bartlesville, OK, Ed, Tulsa, OK, Patty (Mark Davidson), Afton, OK, grandchildren Jared Seger (Crissy), Manassas, VA, Jeff Seger (Cynthia), Norman, OK, Breck Aday, Chanute, KS, Brock Aday (Jamie), St. Paul, KS, Tessa Barnhart (Brent), Tulsa, OK, and JonPaul Aday, Chicago, IL, great-grandchildren, Savannah Seger, Thomas, Avery and Lilian Seger, Charlye and Ace Aday, Remington and Amelia Daniels, Bensen, Knox and Tinley Aday, Jalyn and Gemma Barnhart, and Boudey Dale Clayton, Jr. Walter is also survived by brothers, Wilford Aday, Chanute, KS., Russell Aday, Ponca City, OK., his brother-in-law Joe Ellis (Vicki) of Foyil, OK. and many other relatives that thought the world of Walter. Walter was preceded in death by his beautiful wife, Naomi Ruth, grandson Boudey Dale Clayton, Sr., his parents Henry and Tera Aday, brothers Horace, Curtis, Narvel, Alvin (Cotton), David, Roy, Jimmie, Harold, Billy and his sister, Oneida Layton along with several other members on both sides of his family. Visitation will be held on Tuesday, November 30, 2021, from 5:30 pm to 7:30 pm at the funeral home. Funeral services will be held on Wednesday, December 1, 2021, at 10:00 am at the First Baptist Church-Good News Center in Chanute, with burial to follow at Wards Grove Cemetery in Foyil, Oklahoma at 2:30 pm. Memorials have been suggested to Cherry Street Youth Center and First Baptist Church and may be left with or mailed to the funeral home. Online condolences may be left at: www.countrysidefh.com. Services entrusted to Countryside Funeral Home 101 N. Highland, Chanute, KS 66720.

The family of Walter Edwin Aday created this Life Tributes page to make it easy to share your memories.

Send flowers to the Aday family.