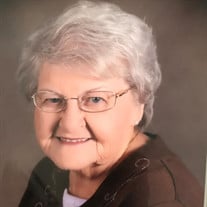 Wanalee Keener, age 90, passed away Saturday, July 17 at Morningstar Care Homes in Fredonia, KS. She was born on September 17, 1930 to Albert and Maranda Isabelle (Innis) Gordon in Richmond, Indiana. She grew up in Indiana and while in high school met and later married her first husband, Robert Arthur Lukens, they later divorced. Together they had seven children. In 1963, Robert and Wanalee moved to Derby, Kansas where she worked in the cafeteria and a nursing home. She loved to cook, sew, spend time in the garden and read many books. She was also an avid bowler, a member of a league when she was younger. On April 21, 1990, Wanalee married Robert Keener in Monett, Missouri and gained three step sons and one step daughter. They lived for several years on Grand Lake in Grove, Oklahoma but later made their home in Fall River, Kansas. Wanalee is survived by: Her husband Robert Keener. Seven children: Gary (Lanita) Lukens of Edmond, OK. Jayne (Sam) Helmkamp of Granby, MO. Susie Buffalow (Billy Ecton Jr.) of Fall River, KS. Anne Beal of Wichita, KS. Pat (Dave) Dickerson of Shell Knob, MO. Robert Lukens of Wichita, KS. Janalee (Bob) Hill of Derby, KS. Stepsons Walt, Keith and RJ Keener. Stepdaughter LaJunta Martin Numerous grandchildren, great grandchildren and two great-great grandchildren. She was preceded in death by: Her parents, brothers James, Bill, Robert and Frank Gordon, and sisters Marguerite Hinshaw, Geneva Creviston and Nancy Macy. Everyone loved Wanalee, she always had open arms for any of her children’s friends and ultimately anyone she met – she never knew a stranger. Memorial services will be held Saturday July 24th, 2021 at 10:30am at Countryside Funeral Home in Fredonia, KS. A private family graveside will be held in Indiana at a later date. In lieu of flowers, memorial contributions can be made to Morningstar Care Homes of Fredonia and can be mailed to or left with the funeral home. Services entrusted to: Countryside Funeral Home 420 S 20th St. PO Box 247 Fredonia, KS 66736

Wanalee Keener, age 90, passed away Saturday, July 17 at Morningstar Care Homes in Fredonia, KS. She was born on September 17, 1930 to Albert and Maranda Isabelle (Innis) Gordon in Richmond, Indiana. She grew up in Indiana and while in high... View Obituary & Service Information

The family of Wanalee Keener created this Life Tributes page to make it easy to share your memories.

Send flowers to the Keener family.