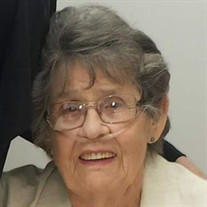 Wanda Faye Marr, age 88 of Fredonia, KS, passed away Tuesday, January 12, 2021 at Kansas Medical Center in Andover, KS. Wanda was born September 19, 1932 in Allen, OK to Floyd and Ruby (Tillery) Smith. While young, the family moved to San Diego, CA, then settled in Hughson, CA. She grew up alongside a brother and a sister, and graduated from Hughson High School. On September 9, 1949, Wanda married Glade Marr in Carson City, NV. They moved around some early in their marriage, then moved to the farm west of Coyville, KS in 1958. Wanda worked for the Corps of Engineers for many years, retiring in 1997. Even though she worked off the farm, she was always helping out on the farm and willing to do whatever needed to be done, even if it meant milking the cows. Together, Wanda and Glade raised 2 sons, Steve and Larry, and enjoyed 58 years together until his passing in 2016. After retiring, they bought a motor home and travelled until they decided it was time to settle down a bit and bought a house in Fredonia, KS in 2003. Wanda loved her family and was a wonderful mother, grandmother, and great-grandmother. She will be missed by all that knew her. Wanda is survived by her son, Steve (Cindy) Marr of Fredonia, KS Grandchildren: Jake Marr of Fredonia, KS Stephanie Willard of Fredonia, KS Maggie Hoesli of Neodesha, KS Great-Grandchildren: Kara Marr, Vincent Marr, Jimmy Willard, Sophia Willard, Jackson Brooks, Carter Hoesli Brother-in-law, Banks Moore of Cayucos, CA Sisters-in-law, Verla James of Tempe, AZ and Ellen Haley of Tuolumne, CA She was preceded in death by her parents, husband Glade, son Larry Glade, brother Bill, and sister Betty. A graveside memorial service will be held on Friday, January 22, 2021 at 1:00 PM at Coyville Cemetery, Coyville, KS. In lieu of flowers, the family suggest memorial contributions be made to The Avenue of Flags and can be mailed to or left with the funeral home. Services have been entrusted to: Countryside Funeral Home, 420 S. 20th, PO Box 247, Fredonia, KS 66736

The family of Wanda Faye Marr created this Life Tributes page to make it easy to share your memories.

Send flowers to the Marr family.