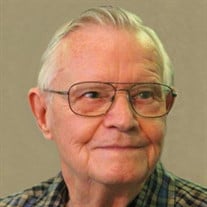 Warren Eugene Alford passed away July 29, 2020 in Kansas City, KS, at the University of Kansas Hospital. Warren was born October 29, 1926 in Chanute, KS, the son of Warren Hoyt Alford and Nola Ruth Webb Alford. He attended Lincoln and Murray Hill elementary schools, Royster Junior High, and graduated from Chanute High School in January, 1944. He immediately enlisted in the US Naval Air Corps as an aviation cadet, where he was sent to college to train as an aeronautical engineer. He was discharged in January 1946. He married Ona Naomi Starr, who was also from Chanute, on February 27, 1946 in Liberal, KS. Warren worked at many jobs in Chanute prior to his graduation - as an usher at the People’s Theater, carrying blocks of ice for Chanute Ice & Storage, and at Bell Body Shop. In 1950, he joined the US Army Reserves, and was activated during the Korean War, serving in Mineral Wells, TX.During his time in the Reserves, he also worked at Tabor Motor Company and for the City of Chanute. Warren and Ona moved back to Chanute in 1952, just in time for the birth of their daughter, Carolyn Kay Alford. Warren continued working for the Ford dealership in Chanute, as it was sold and became Hellard-Hill and then Merle Kelly Ford. In 1965, he moved to Wichita, KS to work as a claims supervisor for Shelter Insurance Companies, and retired January 1, 1989. He and Ona then moved back to Chanute to enjoy their retirement. After Ona passed away in 1990, Warren renewed a friendship with a high school friend, Mary Lou Cooper. They spent many happy years traveling the world. Warren loved photography, travel (he had been to 51 countries and every continent except Antarctica), and anything to do with aviation and aircraft. But most of all, he loved his family and friends. He is survived by his daughter, Carolyn Alford Hatcher, and son-in-law Steven Hatcher; brothers Alfred Allison and Ronald (Evelyn) Allison; sister, Barbara Deane; nieces Debra Lawrence, Sandy Allison, Terry Love, and Lorie Deane; nephews Tom Blancett, Dan Deane, and Rick Blancett, and his special second family – Larrie (Terri) Cooper, Steve (Trudi) Cooper, and Cindy Smith (and their families), as well as many cousins and friends. He was preceded in death by his wife, Ona, his sister, Pearl Blancett, his friend Mary Lou Cooper, nephew, Marion Jay Allison, and an infant daughter, Cathy Deeann Alford. Graveside services will be held on Wednesday, August 5, 2020 at 10:30 am at Memorial Park Cemetery, there will be no visitation, however viewing will be prior to the service at the graveside. Military honors will be presented by the Chanute American Legion. At the request of the family, to keep everyone safe, they respectfully request all attendees wear masks and follow social distancing guidelines. Online condolences may be left at: www.countrysidefh.com. Memorials are suggested to either the American Legion Post #170 301 N. Evergreen, Chanute or the Chanute Historical Society and Museum 0 E. Elm St., P.O. Box 259, Chanute and may be left with or mailed to the funeral home. Services entrusted to: Countryside Funeral Home 101 N. Highland, Chanute, KS 66720

The family of Warren Eugene Alford created this Life Tributes page to make it easy to share your memories.

Send flowers to the Alford family.