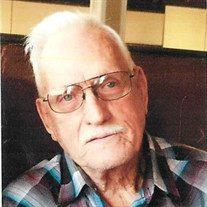 Wesley Lee Lockhart, age 87, resident of Altoona, KS, passed away at Wesley Medical Center in Wichita, KS on Thursday, June 3, 2021. He was born March 11, 1934 to Earl Milton Lockhart and Dorothy Lucille (Witt) Lockhart. He was one of three boys and one daughter born to this union. Norman Eugene Lockhart and wife Rita Pulver, Kenneth Ray Lockhart and wife Vadie Rutherford, and Barbara Jean Grant and husband Carroll Ross Grant. His brothers Norman and Kenneth, along with his parents Earl and Dorothy Lockhart preceded him in death. Wesley was 3 years old when he was diagnosed with Polio. He spent more of the next 3 years in the hospital than he did out of the hospital. He wore braces for many years and struggled all his life from the disability. Being told he couldn’t do something simply made him more determined to succeed. His family moved a lot during his childhood, as his father was a mechanic and carpenter and always found work. When Wes was 16 years old, he had his first job running a service station, moving back to Mayfield, MO. Wes finally settled down in Odessa, MO and took a job at Hallmark Cards. He retired from Hallmark after 25 years as a book maker and stencil operator on March 19, 1978. Although he retired from work, Wes didn’t retire from life and family. On December 6, 1952, Wesley married Mary Josephine Thomas and they raised 2 daughters, Deborah Jo (Ferguson) Lockhart and Nanette Lee (Stone) Lockhart and husband Randy. Wesley had 12 grandchildren and 1 great-grandchild, along with many nieces and nephews. In the summer of 1996, Wesley met Jack and Annie Routh of Altoona, KS. Wesley had lived in Altoona for several years prior and he and Jack started on a fun and work adventure that lasted until his passing. They rebuilt car engines, bought, repaired and sold houses, and became best friends through the years. At one time when he lived in Arizona, he ran a Trading Post where he sold antiques and items he purchased in Mexico. In 2007 in Fredonia, KS, Wesley and Carol Valentine met at a Senior Citizens dinner and became good friends over the next 10 years. In November 2017, God reconnected Wesley and Carol and they soon realized they were destined to be together. On February 16, 2018, Wesley and Carol were joined in wedded bliss in the Coyville Christian Church by pastor George Lewis. Through the years, Wesley became an avid bible student who was hungry for God’s word. Wes loved life, family, and the love of his life, Carol. He will be greatly missed by family and friends. He now resides with his heavenly father in his new heavenly body. A Celebration of Life service will be held at a later date.

Wesley Lee Lockhart, age 87, resident of Altoona, KS, passed away at Wesley Medical Center in Wichita, KS on Thursday, June 3, 2021. He was born March 11, 1934 to Earl Milton Lockhart and Dorothy Lucille (Witt) Lockhart. He was one of three... View Obituary & Service Information

The family of Wesley Lee Lockhart created this Life Tributes page to make it easy to share your memories.

Send flowers to the Lockhart family.