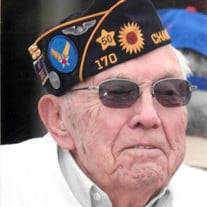 William R. (Bill) Roberts, 98, passed away Saturday, December 12, 2020 at Neosho Memorial Hospital in Chanute. Bill was born October 8, 1922 the seventh of nine children born to James Andrew and Patsy Ann Roberts. He attended grade school in Inola, OK. and graduated from Jay, Oklahoma high school in 1942. Following his graduation he joined the Army Air Corps; he was a radio operator for a cargo plane. He was honorably discharged in December 1945, and returned to Oklahoma. Bill was an agent for National Life Insurance. He moved to Chanute In July 1954 to open a new territory. He and his wife bought the Top Hat Cleaners in 1955, they operated it together for 25 years retiring in 1980. He was an active member of the community. Bill served on Post #170, American Legion Honor Guard for 56 years. He belonged to Post #170 for 65 years and was post commander. He was a member of the First Christian Church, American Legion, Masons, 32° Shriner, V.F.W, and the Elks. He enjoyed traveling, dancing, playing cards and spending time with his family. Bill and Juanita Morgan Bennett were married in September 1946, she passed away in January 1998. They were the parents of Charles Bennett, Bill Jr., and Twila (Chuck) Busse. Grandchildren: Brian Roberts, Mesa, Az., Weston Roberts, Garland, Texas, Lisa Roberts, Bonner Springs, three great-grandchildren, one great-great granddaughter. He was preceded in death by his wife, Juanita, son Bill, Jr., step-son Charles Bennett, grandsons Noel and Nick Bennett. He married Virginia Winans Briley in August of 2001, she survives of the home. He is also survived by Virginia’s children: Linda (Dan) Shoemake, Louise (Bill) Parish, Loretta (Randy) Neely and Bill (Stacy) Wagner, her eight grandchildren and twelve great-grandchildren. William R. (Bill) will lie in state from 12:00 p.m. – 5:00 p.m. on Wednesday, December 16, 2020 at Countryside Funeral Home. Graveside services will be at 1:30 p.m. Thursday, December 17, at Memorial Park Cemetery in Chanute, Kansas. Online condolences may be left at: www.countrysidefh.com. Memorials have been suggested to the Chanute Honor Guard in care of The American Legion and may be left with or mailed to the funeral home. Services have been entrusted to: Countryside Funeral Home, 101 N. Highland, and Chanute, KS 66720.

The family of William (Bill) R. Roberts created this Life Tributes page to make it easy to share your memories.

Send flowers to the Roberts family.