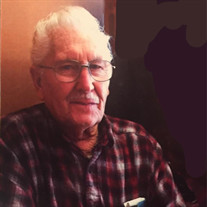 William “Bill” Earnest Wright, 92, of Chanute passed away Thursday, July 8, 2021 at his home. Bill was born on November 9, 1928 in Eve, MO the son of Chester E. and Velma H. (Drummond) Wright. On November 16, 1945, Bill enlisted into the U.S. Navy. After receiving his honorable discharge from the Navy, Bill then enlisted and served in the U. S. Army and served his country for an additional 4 more years until receiving his honorable discharge. He was a proud Korean and WWII veteran. On August 3, 1952 Bill married Bettye Jean Colvin. Bill and Bettye were married for 45 years until her death on September 30, 1997. Bill was a truck driver all of his life after returning from the service. When not working, Bill enjoyed being in his garden, visiting with family and friends, and being with his grandchildren. Bill enjoyed traveling around town, his daily visits with his coffee buddies, and continually practice speaking Spanish and German. Bill is survived by: Children: Jennifer Alene Wimsett and husband Michael of Savonburg, KS Gregory Jay Wright and wife Brenda of California Jerel Lee Wright of Topeka, KS Joel Craig Wright and wife Kim of Missouri Jock Van Wright and wife Cassie of Nevada Jamie Kevin Wright and wife Judi of Chanute, KS Justin Brian Wright and wife Heidi of Oregon Julia Annette Dennis and husband Daryl of Chanute, KS 26 Grandchildren and 28 Great Grandchildren Bill was preceded in death by his parents, wife Bettye Jean Wright, sons Jeffrey Lynn Wright and Jason J. Wright, sisters Barbara Alene Kuplen and Emma Lou Wright, a Daughter-in-Law Dana Joy Wright, a Great Grandson Drake DaMon Walls and longtime companion Juanita Ortiz. Visitation will be held on Thursday, July 15, 2021 from 6-8 pm at the funeral home. A private family burial will be held at Ft. Scott National Cemetery at a later date. Memorials have been suggested to either: Veteran’s Honor Flight or the Wounded Warrior’s Project and may be left with or mailed to the funeral home. Online condolences may be left at www.countrysidefh.com Services entrusted to Countryside Funeral Home 101 N. Highland, Chanute, KS 66720

The family of William "Bill" Earnest Wright created this Life Tributes page to make it easy to share your memories.

Send flowers to the Wright family.