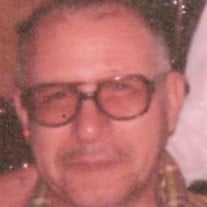 William Neil Bowker age 92, of Chanute, passed away Tuesday, September 29, 2020 at the Diversicare Health Center. William was born on September 29, 1928 in Chanute, KS the son of Floyd W. and Wanda Daisy (Cumings) Bowker. William attended the Chanute country school Old Webster. At the age of 16 he entered the Navy until they found out his age and sent him back home. As soon as he turned 18, he rejoined the U S Navy where he served for 3 years. He was stationed in California then transferred to Philadelphia where he met and married Emily Claire Parkin. William served during the South Pacific Conflict and the Atomic Bomb testing, he was stationed on the USS Shangri-La and USS Currituck. After receiving his honorable discharge from the Navy, William then joined the U S Air Force and served as a firefighter. After serving his country, William returned home and went to work for Chanute Mfg. for the next 30 years. He enjoyed making his own tools from steel, playing solitaire and was a guy of many trades. He also trained in T.V. and appliance training, licensed to sell guns and ammo and became a licensed private detective. In his spare time he enjoyed watching alien movies and Star Wars. William is survived by: Daughters: Evelyn Ewing and husband Eddie of Chanute, KS Shirly Taylor and husband Jack of Chanute, KS Barbara Bowman of Skiatook, OK 10 Grandchildren, 23 Great Grandchildren and 23 Great-Great Grandchildren Two Cousins: Betty Ann Smith and Charles Cumings William was preceded in death by his parents, and also step mother Thelma Rhodes. Wife Emily, son William Thomas, son Floyd Bowker, and grandson Scott M. Ewing. Graveside funeral services will be held on Friday, October 2, 2020 at 1:30 PM at Elmwood Cemetery in Chanute, with Pastor Tom Eastman officiating. Military Honors will be provided by the Chanute American Legion. Visitation will be held Thursday, October 1, 2020 from 6-8 PM at the funeral home. Online condolences may be left at: www.countrysidefh.com Memorials have been suggested to the Wounded Warrior’s Project and may be left with or mailed to the funeral home. Services entrusted to Countryside Funeral Home 101 N. Highland, Chanute, KS 66720

The family of William N. Bowker created this Life Tributes page to make it easy to share your memories.

Send flowers to the Bowker family.